From Wikipedia, the free encyclopedia

Quinn immigrated to the United States in 1866 and settled in Manhattan, New York City. He engaged in the real estate and building business. He was president of the West Side Electric Light & Power Company and was one of the founders and a director of the Homestead Bank of New York.
Quinn was a member of the New York State Assembly (New York Co., 17th D.) in 1883; and was a member of the Board of Aldermen in 1885–1887. He was a delegate to the Democratic National Convention in 1884 and 1888.
Quinn was elected as a Democrat to the Fifty-first Congress (March 4, 1889 – March 3, 1891). Quinn died in New York City on February 23, 1903 at the age of 63; he is interred in Calvary Cemetery, Woodside, New York. 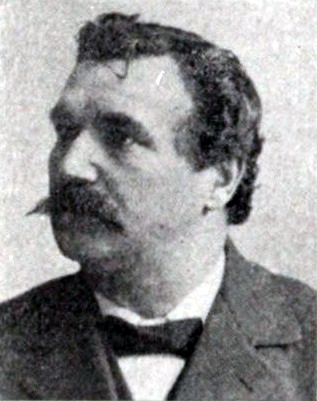 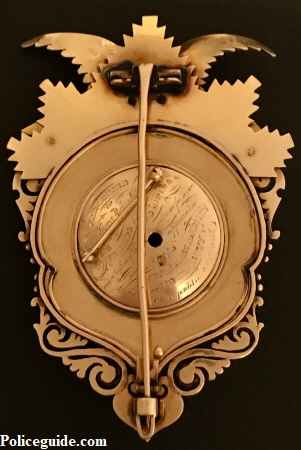 18k gold badge, 4” in height, weighing 4.54 oz.,  presented to John Quinn in 1885 in celebration of his election to the office of Alderman for New York City.

The reverse of the badge shows a removable locket of the front center seal.  Inscribed upon the locket:
Presented to / The Hon. John Quinn / By His Friends and Admirers / as a token of their esteem for him and appreciation of his HONESTY-TRUTHFULNESS AND FIDELITY / TO HIS DUTY / as a public servant.

Honorable John Quinn a 51st. Congressman of New York; a Victorian man who died Feb. 24, 1903. He was born Aug. 9, 1839 in the county of Tipperary, Ireland and came to NY as a stone cutter. He was a well known NY West Side politician. He came to NY about 35 yrs before his death. He entered politics as a Democrat. He was a member of Tammany Hall and served at various times as Alderman 1885, 86 & 87, assemblyman 1882, and the Fifty-First Congress where he helped to defeat a bill to move Gen. Grant from New York to Arlington Cemetery. He also served as Deputy Commissioner of Buildings, Lighting and Supplies. He was a member of the Narragansett Club in West 54th Street and was prominent in Irish affairs. His wife, Sarah C. Quinn and John had six children. He was a member of many other various organizations and all of these organizations--Farragut Post G.A.R. , Anchor Council, C.R.I. Holy Name Society, Liberty Councils Knights of Columbus, Gramercy Lodge, Ancient Order United Workmen, Owen Roe Club, Branch of the United Irish League, Caledonian Club and the 15th and 17th Assembly Districts—all  escorted his body from his residence to the church. He was a loved and respected man. 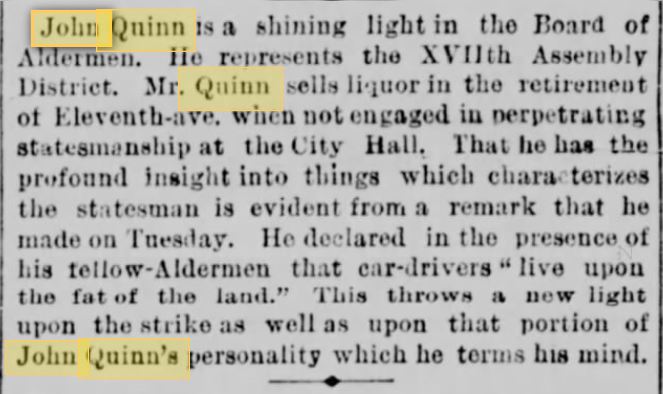 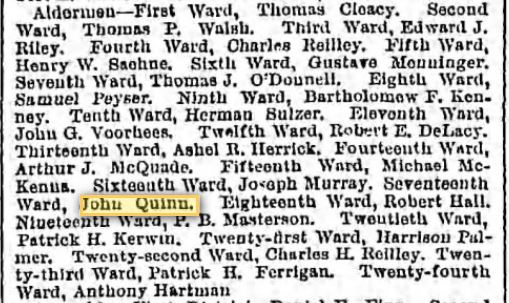 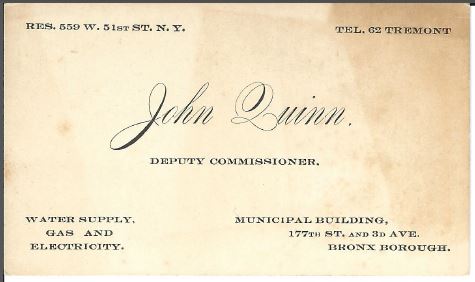 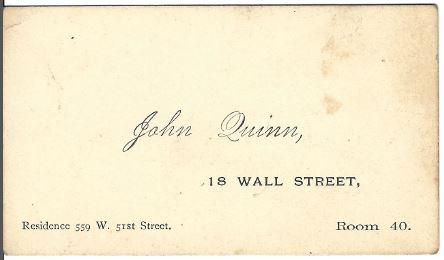 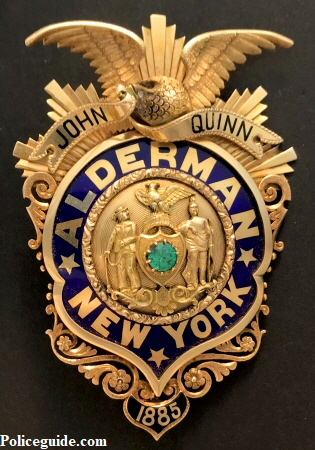