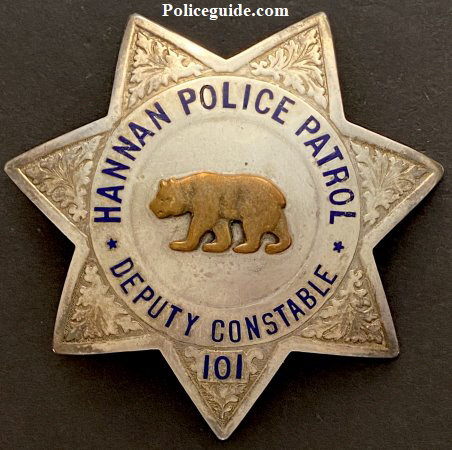 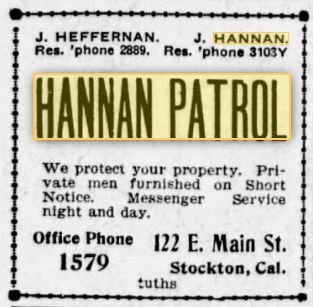 Hannan Police Patrol Deputy Constable badge #101, made of sterling silver by the Ed Jones Co. of Oaklalnd, CA from the early 1900’s when the laws allowed private police patrols.

A native son of California whose memory reaches back to its pioneer days, John C. Hannan, the president of the Hannan Patrol and Detective Agency, was born at Stockton, Cal., January 9, 1862. His parents, both natives of Ireland, were John and Catherine (Collins) Hannan, both now deceased. The father was a '49er and he crossed the Isthmus on his way to California and mined at Sonora, Tuolumne County. He died in 1862 and Mrs. Hannan was later married to J.W. Maher; she lived to be eighty-eight years old and was the mother of eleven children, dying March 31, 1913. By her first marriage the following children are living. James B., John C., of this sketch, Mrs. J.D. Gall and Mrs. Delia Douville, and of her marriage to Mr. Maher, William J. Maher, Mrs. Annie Hudson, Mrs. Maggie Knap and Miss Mamie Maher.

John C. Hannan attended a parochial school at the corner of San Joaquin and Lafayette streets, Stockton, for a short time but he was obliged to earn his living at a youthful age. He became a jockey when he was ten years old, at that time weighing less than eighty pounds. He rode running horses all over the state, riding for Judge C.E. Creaner, Wash Trahern and Judge Terry, all well-known horsemen of Stockton in those days. When he grew too heavy for the saddle he went to Nevada where he rode the range for a number of years, and also engaged in mining, working in the Aurora gold mine in Esmeralda County, Nevada.

In 1885 Mr. Hannan returned to Stockton and became an attendant at the State Asylum for two years, and for the next twenty years was in business in Stockton. In 1909 he started the Hannan Patrol and Detective Agency, an undertaking that has proved very successful, and in 1913 George M. Clark became his partner and is the manager of the agency. The patrol consists of six men who patrol beats in the business and residence section of Stockton at night and through their work many notorious criminals have been taken up; they act in complete harmony with the sheriff and the police department of Stockton. The detective branch of the agency works all over the state as well as in the other Pacific Coast States, and number some competent men among their personnel.