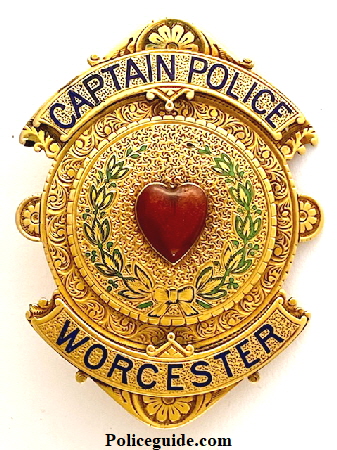 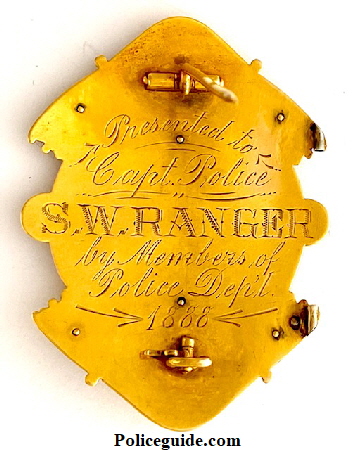 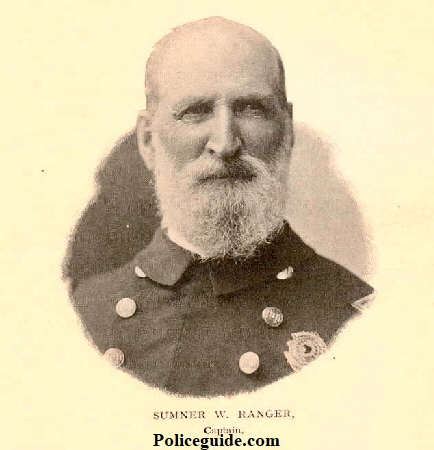 Back of Worcester Captain badge:  Presented to Capt. Police S.W. Ranger by Members of Police Dep.’t 1888.

Worcester Captain badge made of 14k gold with a red heart in the center surrounded by a green enameled wreath.  Badge is completely hand engraved with enameled lettering in Royal Blue, circa 1888.
Al Mize Collection. 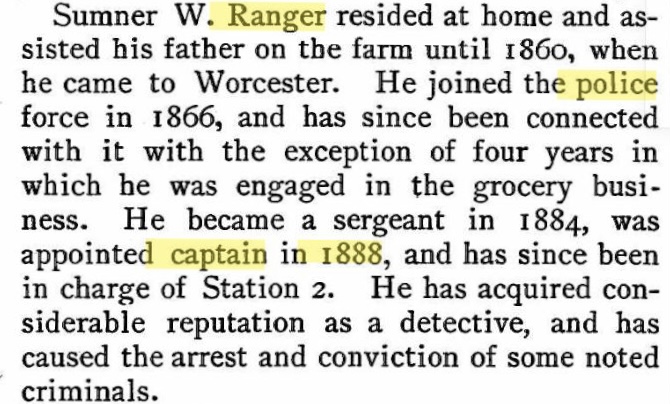 Capt. Sumner W. Ranger of Station 2 was born in New Braintree July 25, 1832. He lived there until twenty-eight years old, going to school winters in his earlier years and working on, the farm summers, his parents being prominent farmers in the town.  He came to Worcester in 1858, and went to work trucking for Joseph H. Gould, who had a stable on Lafayette street. This street at that time was sparsely settled, and trucking business on the "Island" amounted to but little. In 1860 Captain Ranger bought out the business, and for six years carried it on with success.

Jan. 6, 1866, he was appointed a member of the police force by Mayor James B. Blake, the city marshal being Capt. J. B. Knox.  Captain Ranger is the only member of the present force who saw police service immediately after the war, and remembers distinctly some of the principal events of the early days on the force. He has several souvenirs of the early department, including a rattle and the first printed set of rules under which the watchmen were governed. He and Deputy Chief of Police Amos Atkinson are the only members of the present force who served with the old night-watch. In 1866 several policemen were added to the force, and it was the year the watchmen's rattles went out of service and the revolver and billy came in ; it was also the year uniforms were adopted. During Captain Ranger's early connection with the department, the police station, under the old City Hall, was re-paired and enlarged, and during the progress of repairs prisoners were locked in the brick school-house at the lower end of the Common. He traveled on what was called the night-relief, the territory of his beat covering Main, Green and Summer streets, and he also traveled the "Meadows" beat and on Vernon street.He was an officer in Pine Meadow when it was a rough section, and he is reminded forcibly of this fact because he lost two sets of teeth and had his nose broken at various times. Raiding for rum was the principal work of the earlier days, the police administrations being instructed to strictly enforce the liquor-law, and under City Marshal James M. Drennan some famous raids were made.

In 1868 occurred the murder of Joseph G. Clark in the Union block by Silas and Charles T. James of East Greenwich, R. I., one of the famous cases in the police history of Worcester. Captain Ranger was the first police officer in the room where Clark's body was found, and with Louis Harper arrested Silas James at the old western depot, where he was waiting for a New York train. The next day Charles James was arrested in Provi-
dence, and Officers Ranger and W. H. Clark and Deputy Sheriff Charles X. Hair went to Providence, the prisoner being turned over to the officers, and they brought him to Worcester. James made a confession to Officer Ranger, and as a result the hatchet with which the murder was done was found by Ranger in the old
canal. The two murderers were convicted and hanged. Captain Ranger is the only officer in the Police Department at any time who figured in an arrest of a murderer for a crime committed in Worcester for which there was a hanging.  In 1872 Officer Ranger was dropped by Mayor George F. Verry, and went into partnership in the grocery business at New Worcester with Geo. H. Brown. He remained with Mr. Brown until 1876, when he was again appointed on the police force by Mayor Clark Jillson, and has been a member of the force since.
Between 1872 and 1876 he furnished officers with valuable clues, as he never lost his interest in police work. Shortly after he was dropped from the force, J. Goodrich Scott, a swindler of considerable note, escaped from the Summer-street jail. George F. Yerry was his counsel and Charles N. Hair was jailer. Scott lived in Watertown, N. Y., and Captain Ranger was appointed deputy sheriff to follow him for the purpose of bringing about his
arrest. He traced him through towns in northern New York, but missed him at Watertown. He arranged with the officials in Rome and Watertown, N. Y., to send him word when Scott put in an appearance, and as the result of this work Charles X. Hair went to W T atertown and brought Scott back to Worcester on information furnished by Captain Ranger.

From 1872 until he was appointed sergeant, he traveled beats in the centre of the city, being on Front street considerable of the time. In 1884 he was appointed day-sergeant at Station 2, succeeding John W. Hadley, ,the recommendation being made by City Marshal Amos Atkinson and the appointment by Mayor Charles G. Reed. In 1888 he was appointed captain by Mayor Samuel W'inslow, and he wears a gold badge presented' him by
the department at that time. He has good executive ability, which was shown during the police shake-up in 1899 under Chief of Police James M. Drennan, when he had charge of Station i patrolmen in May, June and July, exchanging stations with Capt. D. A. Matthews. He has always had the respect of the officers under his
direction, and has a record as a policeman of which he may be proud, having arrested persons for every sort of offense and crime from drunkenness to murder. 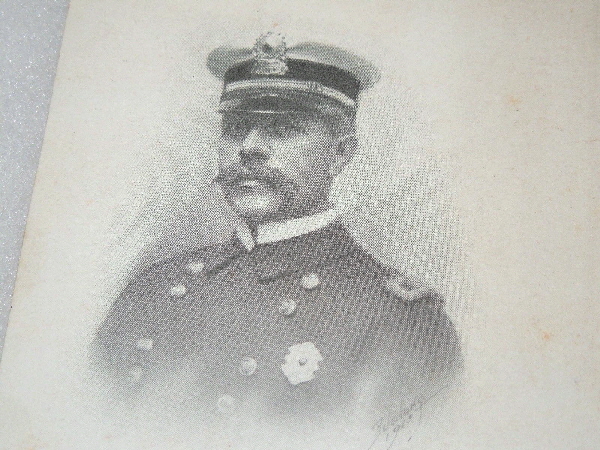