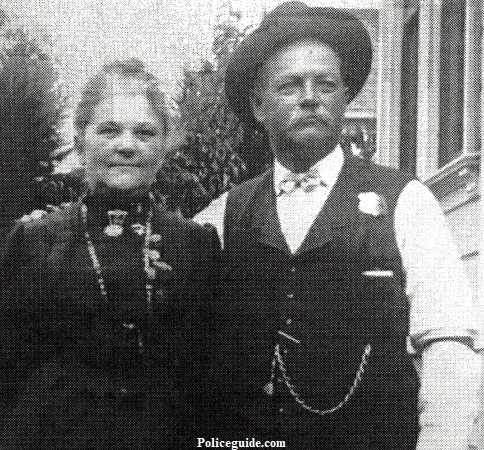 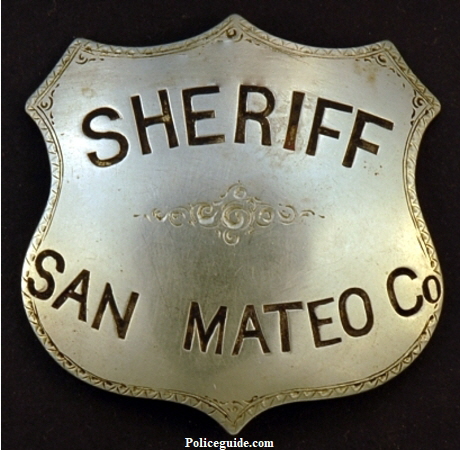 Joel Mansfield Undersheriff / Sheriff badge.
Made by Will & Finck 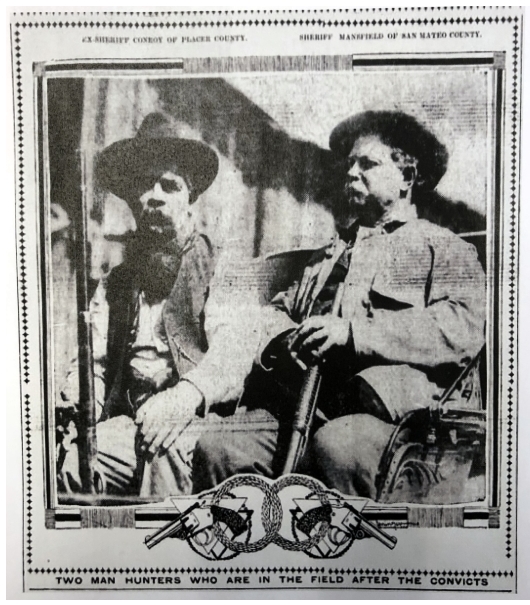 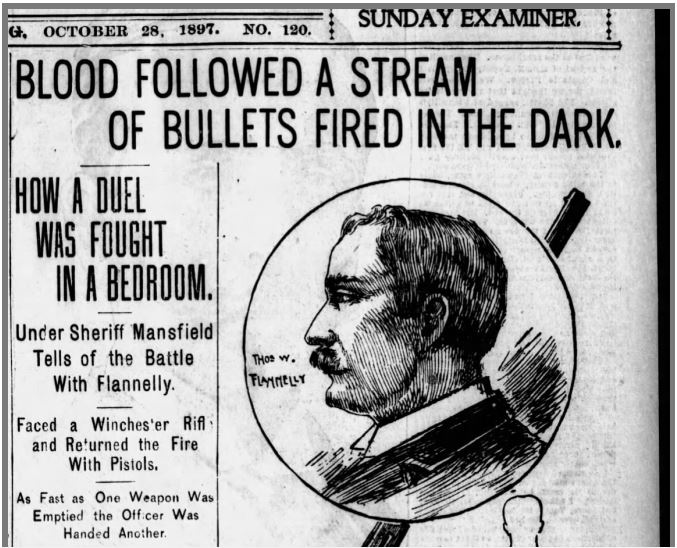 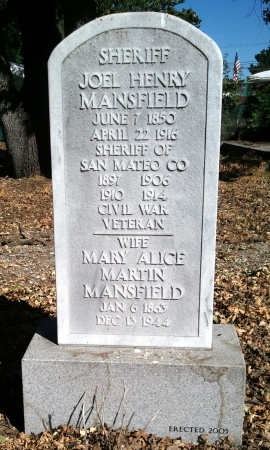 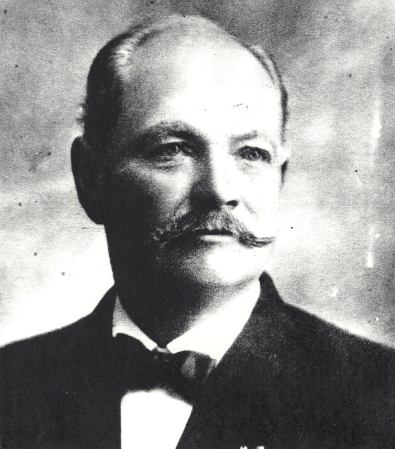 Joel H. Mansfield, former sheriff of San Mateo County, and one of the most beloved citizens, passed to rest last Saturday morning after an illness extending over a period of many months. Mansfield was born in Baltimore. Md. On June 7, 1855. He was reared and educated in Massachusetts and at the age of 12 years became a messenger boy in the U.S. Navy. After years service, he enlisted in the 2nd Mass. Cavalry, which was composed of the 2nd Mass. and 2nd California.

At the battle of Fisher’s Hill, Mr. Mansfield was shot in the left side just below the heart and was again wounded at the battle of Opequan Creek and Harper’s Ferry. His position thru out the war was one of extreme danger and his experiences are indicative of his courage. He received his honorable discharge June 27, 1865.

He returned to Boston where he learned the painters trade and in 1867 came to California, settling ¡n San Francisco, where he remained until 1880. Becoming interested in the oil agitation which was occupying the minds of the western people at that time, Mr. Mansfield gave up the business in San Francisco and with a company that had been formed, came to San Mateo County in 1880 and began boring for oil at Purissima. After six months he withdrew from the company and re-engaged in his trade at Half Moon Bay.

In 1882, he was elected constable and also appointed deputy sheriff for the 4th District which office he held until 1892 when he was made under sheriff by the late Phil McEvoy.  It was in this position Mr. Mansfield distinguished himself as a courageous officer and won the confidence of the people by participating in a number of arrests which were wrought with the gravest danger on account of the desperate character of the criminals. Among these was the arrest of A. Azoff, May 15, 1895, the murderer of Detective Leonard Harris

In  April 1897 Sheriff McEvoy was wounded in a desperate battle with a criminal and died a week later. Under-sheriff Mansfield who played an important part in the battle which proceeded the arrest of the man, and who received a bullet wound in the arm, was a unanimous choice of the supervisors to succeed McEvoy. After serving the unexpired term, Mr. Mansfield was elected to the position. He held the office continuously until 1914 with the exception of one term 1906-1910, when Robert Chatham was sheriff. He was defeated for re-election in 1914 by Michael Sheehan, the present sheriff.

Mr. Mansfield’s illness was the result of a severe nervous breakdown following a strenuous but unsuccessful campaign, in the fall 1914 for re-election. Heart trouble and other complications developed which gradually undermined the once powerful constitution of the former popular police officer and Civil War veteran. Pneumonia set in on Wednesday and hastened the end. Surrounded by his faithful wife, who had been constantly by his side during his long illness, tenderly and lovingly caring for him and by his two sons Albert, the city attorney and Harland.  Mr. Mansfield peacefully passed away at 9 o’clock in the morning.

The announcement of his death was the cause of widespread sorrow through-out the city where Mr. Mansfield was loved and respected by all. Flags were raised to half-mast on the principal buildings in the city and at the courthouse out of respect to the memory of the departed.

Mr. Mansfield married Alice Mansfield, daughter of a prominent lodge man. He belonged to the Masons, Knight Templars, Mystic Shriners, Eastern Star, Odd Fellows, Rebekah's,  Ancient Order of United Workman, Druids, and Grand Army of the Republic.  The funeral was held Monday afternoon from his late residence on Hamilton St. The  services were conducted by Rev. C. H. Stevens of the Congregational Church and Rev. M. B. Young of the Methodist Church.  Hundreds of sorrowing friends came from all parts of the county to attend the funeral. The members of the Grand Army of the Republic and the Relief Corps turned out in body and marched to Union Cemetery where the interment took place. 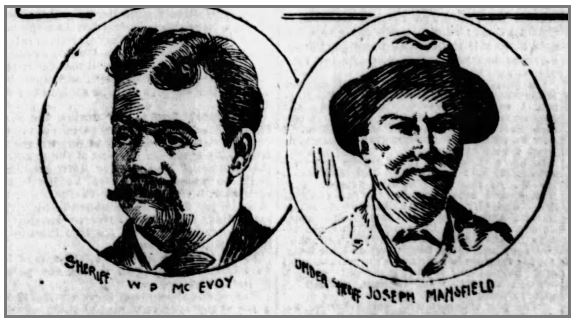 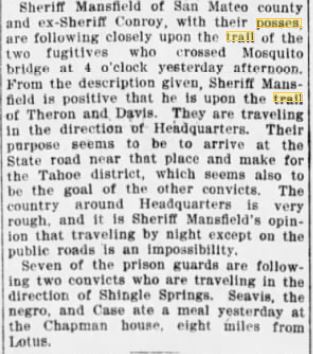 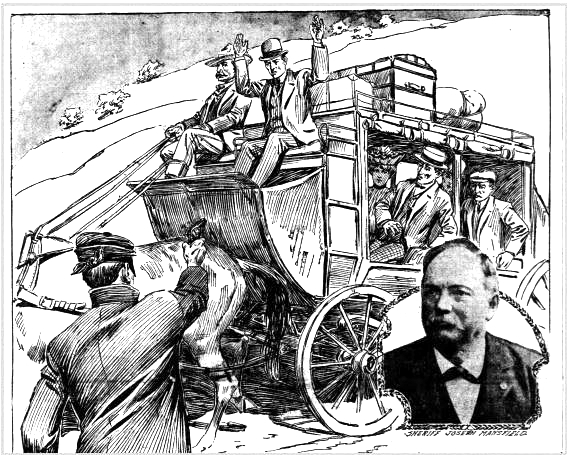 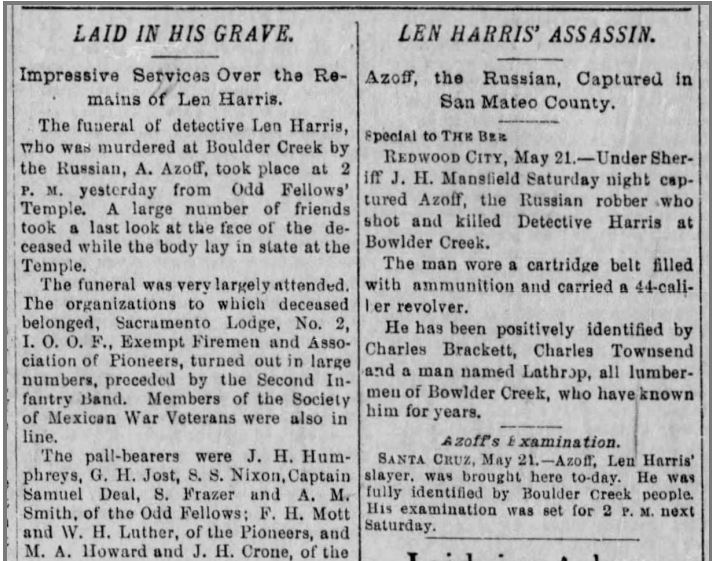 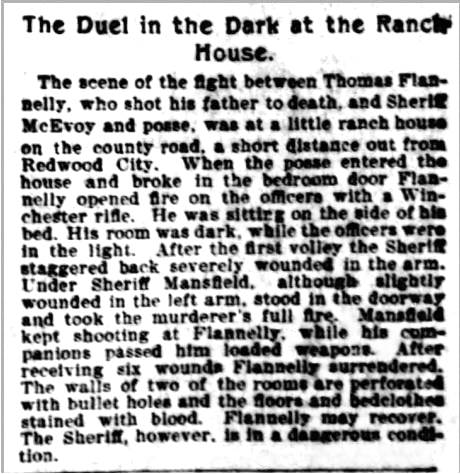